In less than five years, more than a third of the banks present on British high streets have shut their doors for the last time. The vast majority have come from the so-called “big four” banking groups; RBS group, Barclays, HSBC and Lloyds banking group. As banks continue to shut at a disconcerting rate and the future of British personal finance hangs in the balance, the continual closure of high street banks leaves the most vulnerable in society bereft of essential financial advice.

According to a research carried out by Which?, there were 3,303 bank branch closures, equating to 34% of the network, between January 2015 and August 2019, the consumer group said. However, the network has reduced in size from 9,803 branches to 6,549 over the period, with the number of closures being slightly offset by 49 branches also opening. Of the UK’s bank branches that remain open, 298 are now operating with reduced opening hours of four days a week or less.

This might cause stress to clients and customers as they need to change their habits. That is why loan price comparison site FairMoney has conducted a national research looking into the state of personal finances in the UK and found that 10.5 million people were in the worst financial position they had ever been in. Furthermore, 27% of Britons, equating to 18 million people, have experienced a regular loss of sleep due to continued stress caused by financial worries.

Dr Roger Gewolb, Founder and Executive Chairman of FairMoney, has commented on the need for available financial services, such as financial advice, that is provided by the high street banks.

“Quite often when we think about personal finance, we forget about the psychological and health implications that insecure finances can have on us. We can see the damaging effect that a poor financial position is having on millions of Brits up and down the land. One of my key pieces of financial advice that I give to people is that conversations about money are vital to ease stresses. This is a service that the traditional high street bank provided for local communities.

Now however, as banks close, people don’t have advisors to turn to. If you’re being kept up at night and need to speak with someone, one of the last things you want to do is wait on hold to speak to an operator for low quality advice. It is a sad state of affairs that increasingly, people in Britain do not have a familiar face to turn to.”

5 Helpful Tips to Make Your Restaurant Business a Success 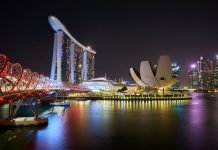 How To Maintain A Good Credit Rating In Singapore